Don't Delude Yourself With Your Own Data

Last week, I wrote about valuing the context of the data you are viewing at least as much, if not more than the content. This is important when you are analyzing the data that other people have put to you and in revealing agendas they may have in the data.

But what about looking at your own data? What is it telling you and how do you know you are getting the right information out of it?

Clearly the first thing to do is to make sure your data is good. Garbage In / Garbage Out comes to mind.

But the next thing to keep in mind is how you are looking at your data. Looking at raw data doesn't lend itself well to analysis. We are a visual people and a picture can be worth much more than $1000. Look at your data, don't read it. That's the only way you will truly pick up patterns and pattern recognition is widely valued as one of the most important business traits.

Once you have good data and you're ready to review it, consider what is important to you. Raw data is difficult to pull trends from. One month of revenue being up may not be a good indicator that you are in an uptick. Instead, look at the Rate-of-Change for your data. These measurements will do a much better job of showing patterns and trends and can even be leading indicators to see where you are heading before it is obvious from the raw numbers (For an excellent book on this subject, read Make Your Move by Alan & Brian Beaulieu).

These rate-of-change charts show the amount of change over time in a metric while smoothing out seasonal or anomalous aberrations.

Take a look at the two graphs below. They are both taken from the same data. (For the purposes of this post and using real data, I am using US IP figures. This could just as easily be any number of metrics for your own company such as revenue.) The US Industrial Production data is an excellent indicator of the economy as a whole. The bottom graph shows the raw data from Feb-2003 through Apr-2010 (you can really see the dip that started in August 2008 and really started tanking in October of 2008.) 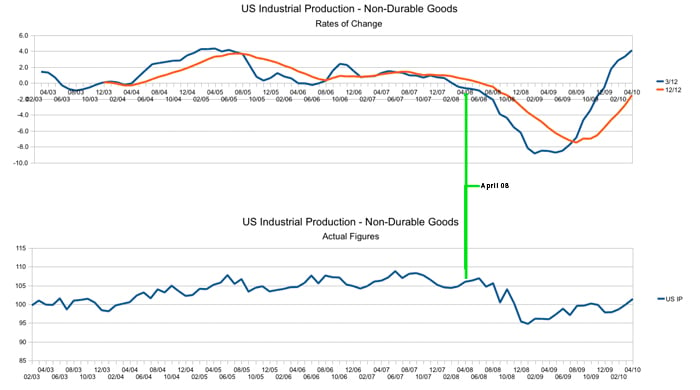 The top graph shows the rate-of-change data for the same time period. Running the numbers and really getting granular, you could go back to any point and make valuable comparisons in what is happening between the two graphs, but for the sake of brevity, lets stick with our more current situation.

The bottom graph is a point in time graph. Each month is generally considered as separate data from the previous or following month. Any given point doesn't tell you too terribly much about what is going on. But when you take that data, along with the top graph, you really start to tell a story. Even though the IP didn't really start to tank until August '08, you can see that IP rate-of-change was dropping as far back as December of '07 and went negative in February of that year and didn't recover. Because the rate-of-change calculations are longer term, someone really following that could have perhaps been more prepared  for the drop off because they had 8 months or more of data telling them that something was coming.

This is just one indicator and you would certainly not make major decisions based on just this indicator. But it would be a good idea to have 6-10 indicators that your business generally follows and keep an eye on them. The Beaulieu brothers say, if 2 indicators change, pay attention, if 5 indicators change, make a move. Not bad advice.

I'd certainly look at other indicators, but if the IP is telling us anything, it may be that, at least for the time being, we are in for an upswing.